Among the cases discussed by Prof. Murray included Rucho v. Common Cause (partisan gerrymandering), Department of Commerce v. New York (the census question case), Janus v. American Federation of State, County, and Municipal Employees, Council 31 (union “Fair Share” dues and the First Amendment), Gamble v. United States (separate sovereigns doctrine with discussion of stare decisis), June Medical Services v. Gee (admitting privileges and abortion providers), Box v. Planned Parenthood of Indiana and Kentucky Inc. (Indiana law on the disposition of fetal remains), and Kisor v. Wilkie (deference to agencies). In her discussion of resolving conflict, Prof. Murray addressed the concept of stare decisis and how the Robert’s Court is approaching it. In the past, the Supreme Court has weighed specific factors in its consideration of overturning precedent: (1) the quality of the past decision’s reasoning, (2) workability, (3) its consistency with related decisions, (4) changed understanding of facts and legal developments since the past decision, and (5) reliance on the decision throughout the legal system and society. While Professor Murray characterized Justice Roberts as an institutionalist, concerned with the reputation of the Court, she also indicated that the Robert’s Court may be on the path to revisiting the rules of stare decisis. She pointed out the opinions by Justices Thomas and Gorsuch in Gamble and Kisor as movement in this direction.

She closed by responding to an audience member question that people cannot depend on the Federal courts to be our advocates. People need to be involved at every level, state and federal government. All in all it was a fascinating discussion with great questions from the audience as well.

As part of #Constitution Day, and in connection with the lecture, the Law Library had a well-received exhibition titled “Hamilton Is Here! The display included a number of noteworthy items. These books were of exceptional rarity and importance, being the original first editions of some of the key works in American legal and constitutional history.

One of the remarkable item from the display was “The Federalist Papers.” Published in 1788 in two volumes, first edition of one of the key works in the history of the United States. It is a collection of 85 articles and essays written by Alexander Hamilton, James Madison, and John Jay under the pseudonym “Publius” to promote the ratification of the United States Constitution. The collection was commonly known as The Federalist until the name The Federalist Papers emerged in the 20th century. 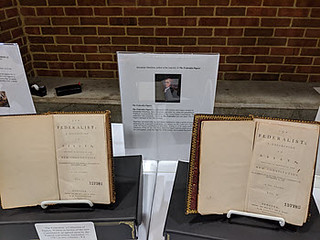 One other item on display was a rare work, being one the earliest books printed in Cincinnati “Laws of the Northwest Territory.” Published in 1800 in Cincinnati from the Press of Carpenter & Findlay, Printers to the Territory. 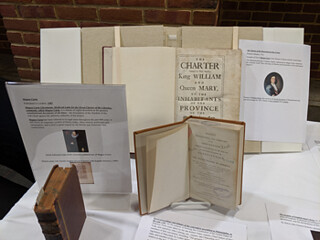